Prologue : “What Follows in Shadow” 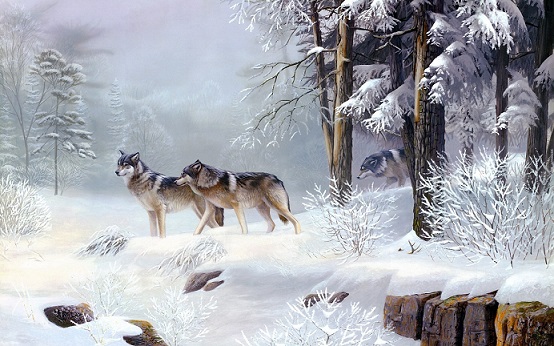 Winter is a lean time in the Forest Kingdom’s woodlands. Most frontier communities lay their seasonal workers off after the harvests, and until the spring, many workers prospect, trap or ride the frontier searching for bounties on bandits, or become bandits themselves, to survive.

This fall has grown cold, and while the harvest still looks good, increasingly cold, dark days hint of a winter filled deep with snow to come. TR 1049-50 is threatening to be a “Wolf Winter”, when the rivers freeze solid and the wolves, or worse, come down out of the mountains, hungry and thirsting for blood. During these times, the local lords often offer a bounty on wolf hides and goblin ears, and unemployed hands and adventurers drift into the border towns in the frontiers, seeking to earn a living. 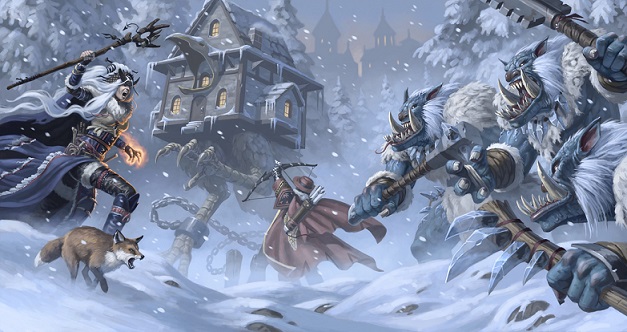 What started on the 2nd of Savor, “The Fading” in the trade town of Hexwater, has led to uncovering ancient truths of the origins of the land of their youth, and immersed the adventurers in the politics of the realm of Thornkeep. With the rise of war, the adventurers chose to raid the halls of King Hargulka, and steal The Elder Scroll and its powers before any other faction took possession of it. They succeeded and found themselves founding a new realm, and wistfully looking towards the City of Bright Sails, hearing rumors of war and something intangible rising in its midst. The chapter ends with the adventurers seeking out the wisdom of their foster father, Coinneach “Old Man” Shadow, and rescuing him and several others from imprisonment in a forgotten corner of the realm.

Chapter Two : “Shadows of the Apocalypse” 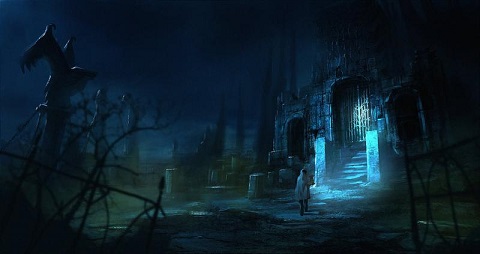 Starting some months into the new year (TR 1050), the adventurers became concerned by rumors of a great dragon awakening in the northern territory, and journeyed north into the ruins of the ancient dwarf citadel of Droskar’s Crucible. Within they encountered a sect of fire-worshiping creatures trying to open a fire node in its depths, and seized several valuable relics from their grasp, and stopping their plans. Meanwhile various creatures of the First World and the Shadowfell began to appear and swear allegiance to the new Wyldfae Court, the Court of Thorns and Roses, many claiming to be fleeing something best not spoken. Ancient secrets long hidden in the village of Thornkeep, lead the adventurers to hunting a so-called “Dream Thief” into the Shadowfell through a sputtering portal to this realm; they manage to defeat her allies, and an unknown force guarding the ruins of the Corruptor’s temple in the Shadowfell, Eliseera Applewarden herself managed to flee into the depths of the Shadowfell, hopefully never to be seen again. 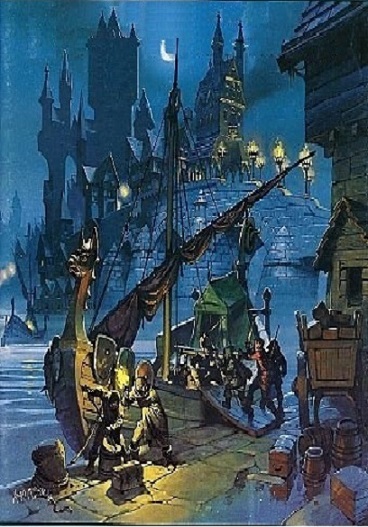 The adventurers return to the City of Bright Sails, and reacquaint themselves with its citizens, resources and opportunities, many fulfilling personal tasks they have planned for their accumulated wealth. During these efforts, they encounter the “Chaos Curse” first-hand, discover a strange new drug called Shiver is sweeping the poor districts, and are hired to resolve a question regarding the mysterious Banewarrens. After encountering a band of monsters of diverse origins seeking something called the The Black Grail, the adventurers investigate yet another cursed ring, which leads them to the Tolling Tower, and resuls in some information regarding the Pactlords of the Quaan, and the the Quaan itself.

Turning aside from that investigation, the group attempted to resolve the local problems with Shiver, eventually leading them to explore Mariposa Manor, and break the spider cult behind the Shiver trade. They are confronted by Mog-Lathar, the Petrified Spider at the height of their investigation, along with a horde of cultists and after slaying them all, discover they have new, oddly semi-divine powers, along with an odd knowledge of the rise of several other semi-divine beings, including their long-term enemy, Blackmaw the Black Witch. 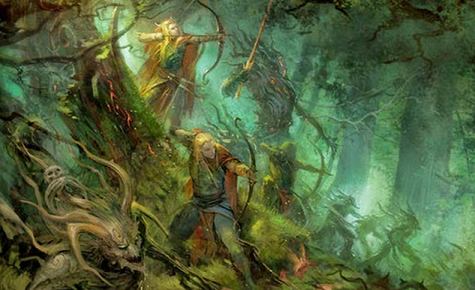 The adventurers Teleport directly home to Green Dagger, and find the fey world continues in disarray. A new power has begun to influence the Court of Thorns and Roses, known as Rhoswen the Ancient, and she is beginning to draw away some of the refugees that might otherwise seek safety in the MapN’Dor. the Princess of Thorns travels in search of the wisdom of the legendary Green Man, defeating the beast that held him imprisoned in the Temple of the Stag, revealing the true “Stag Lord” to be a beast of the First World. Although the Green Man slips away into wherever gods go to die, he leaves behind the legacy of the Seed of Life.

Summoning the Army of the MapN’Dor to herself, they return and hold a feast for the gathered fey who answered her call, and then eradicate the gathered tribes of the Briarwarren, using the Lyre of Building and the gathered fey Host_ to great effect. The Host is then dispersed. However, bravado leads to a slight against Baroness Neria Blackshield during negotiations with the leader of Timberstar, and the group returns to Green Dagger unsure of whether they just declared war on or not.

Upon their return to Thornkeep, the adventurers devise a plan to split the MapN’Dor evenly between Thornkeep and her own Court of Thorns and Roses, and attempt to fulfill Rik’s vow to find, slay and deliver the head of Tervin Blackshield back to Lady Ivis, journeying to Bloodmoon Crag in the far north, and slaying him and his clan of “Stonewalkers”. They also rescue numerous abused orphans. On their return journey south, they take a side visit to the “Goblin Market”, meeting both Do’Orn, the Baugle, and the wife of Brolog-Dur, before returning back to Green dagger, adopt several of the orphaned children rescued, and decide to make a return to Mornhaven, and resolve some of the issues they had left behind. They also meet with the Borderland Court’s envoy, Lady Feyre Sorreminx, who informs them of the rise of Blackmaw to the title of Lady of the Crawling Fey. 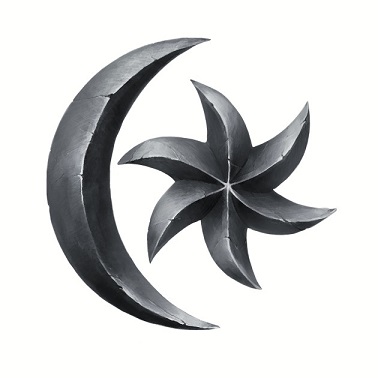 Chapter Five : “The House of Moon and Stars”

Upon their return to Mornhaven, they discover the city in disarray, as Umbriel, the Shadow Isle dominates both the landscape and local rumors. While attempting to acquire the Key of the Banewarrens to gain entry into the Banewarrens, they are introduced to Nicalon Regal, who betrays them and steals the Key for themselves, revealing himself to secretly be Skazzy Saltruin, and that she has a past much closer to the adventurers than they originally thought.

The group begins travelling wildly about the lands they know, passing back and forth between Mornhaven and Green Dagger Farm on business, and trying to find some answers to their own personal questions. They eventually investigate the legacy of the Green Dagger Gang, which leads them to eliminate and rebuild the Yellow Knives into the legacy of their old parents (?) gang. They travel to Velkynvelve in search of House Saltruin, and explore a stretch of the primary trade passage of the local Deep Way, but without much success. They even lose track of Lalaith and Magistrate Stanton Druid, hearing rumors that the latter worthy was dead as a result of the collapse of the whole Shiver trade.

And then the Dreams and effects of the previous Shiver trade return; murders and chaos are becoming commonplace in the city streets, and that maybe their perception of history is different from what is generally believed. Phaedran Skyships appear and blast the hostile denizens of Umbriel, the Shadow Isle, and it becomes apparent that “Skazzy” Saltruin has been busy looting the newly open site. Her plans remain inscrutable at this time. 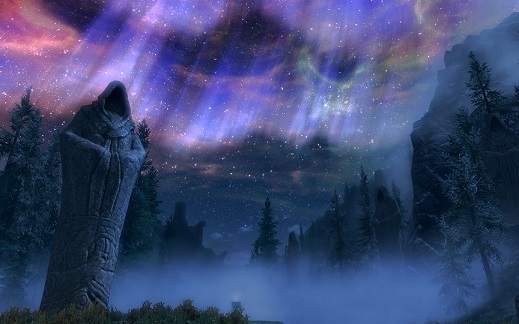 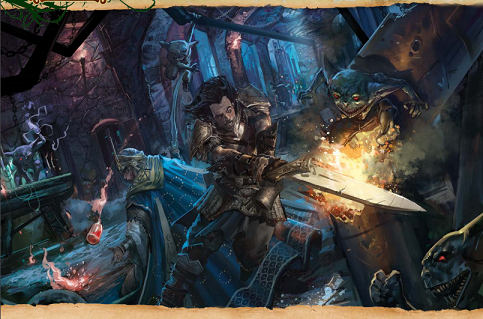 Chapter Eight : The Tools of Fate"

Forgive me for being nose, but I stumbled across this game of yours and it has piqued my interest. I have fallen for your story, finding it fascinating and something I enjoy reading. I do notice things from other forms of media, like the Fire Ants from Fallout, and The Elder Scroll from, well, the Elder Scroll Franchise. I find myself reading quite a bit, and seemingly losing my sense of time when I do so.

Do think nothing of this comment, I am merely complimenting the DM for such an interesting story ^^

I'm sorry, but we no longer support this web browser. Please upgrade your browser or install Chrome or Firefox to enjoy the full functionality of this site.